Kirant Sunuwar Welfare Society UK would like to inform everyone that on 16th January 2011, an emergency meeting was held at Farnborough. This was because the Chairman had decided to step down due to unavoidable personal circumstances. At the meeting, the executive committee and advisory committee members accepted the Chairman’s resignation, thanked him for his contribution so far and wished him well for the future.
The meeting was also utilised to discuss appointment of new Chairperson. After deliberations, the committee announced that the Vice-Chairperson Jang Bahadur Sunuwar would be appointed as the 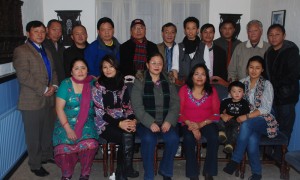 new Chair and that his vacant position would be filled by Khadananda Sunuwar.
Both new appointees promised to undertake their new roles with sincerity and wholehearted commitment.